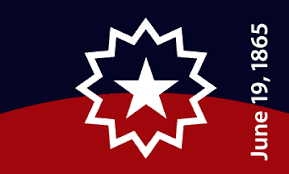 Juneteenth, also known as Juneteenth “Independence Day” or “Freedom Day”, is a holiday that commemorates the June 19, 1865 announcement of the abolition of slavery and the emancipation of African American slaves.

On September 22, 1862, President Abraham Lincoln issued the Preliminary Emancipation Proclamation effectively ending slavery on January 1, 1863, however, the Proclamation had little effect in the State of Texas until two and half years later. It was on June 19, 1865, that Union General Gordon Granger read General Orders No. 3 to the people of Galveston, Texas:

“The people of Texas are informed that in accordance with a proclamation from the Executive of the United States, all slaved are free. This involves an absolute equality of personal rights and rights of property between former masters and slaves, and the connection heretofore existing between them becomes that between employer and hired labor.”

In 2021 Juneteenth was made a Federal Holiday. A bill was also signed in Oregon for Juneteenth to become a State Holiday the following year in 2022.

In Oregon, Juneteenth Oregon Celebration was founded 50 years ago by the late and beloved community leader Clara Peoples. The celebration of Juneteenth Oregon dates back to 1945 when Peoples introduced the tradition from Muskogee, Oklahoma, to her co-workers at the Kaiser Shipyards in Portland. Upon moving to Portland in 1945, Clara Peoples was surprised to learn that the Juneteenth holiday was unknown in this part of the country. She introduced the holiday to her co-workers at the Kaiser Shipyards during their break being the first Juneteenth Celebration in Oregon.

Juneteenth OR has many opportunities to get involved.

We’re looking for event sponsors, vendors, volunteers, and parade participants for our upcoming event. We count on supporters like you to help make our Juneteenth Oregon Celebration successful. Make a donation to show your support.

View important dates and upcoming events on our calendar.